Public Libraries...A Nice Place to Visit Any Time of the Year


When my children were younger, summer started with a visit to our local library. Both of my daughters had their own library cards. They would each get a bag of books (there wasn't a limit as to how many books one could check out at a given time) and spend long summer days on our screened porch, escaping to far away places with their imaginations. 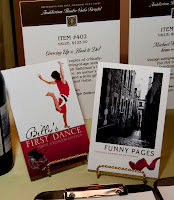 Library books accompanied us on vacations, to the pool, on picnics and in our backyard. Those books coexisted with swim lessons, cookouts, baseball games, fireworks and sleepovers.

Looking back, I can't imagine summer without our library. We made several visits throughout the three month break, taking advantage of what that big, old building had to offer our community. I was always surprised when I learned of someone who had never stepped inside its doors. What a loss to them.

But libraries are wonderful places to explore any time of the year. Many educational programs are offered, often after school, on weekends and evenings for children to enjoy. Some explore other cultures, while learning about history and different languages. Various classes throughout the year are provided to children, teens, adults and seniors focusing on everything from special interests, hobbies and lifestyle improvement. All can benefit from utilizing our libraries...and one can't forget the books.

Even though technology has changed the way we read books today, a visit to the library is still a treat for me and brings back warm memories of when my children were little. I remember discovering new authors' works in the library. Many became some of my favorite storytellers.

Public libraries are nice introductions to the world of books for children. They help establish a foundation in reading and can nurture a lifelong passion for books. The two books in the photograph are my published works and I'm seeing them slowly make appearances on the shelves of these public buildings. I find it an honor for them to be there. I hope many enjoy escaping with their stories on a lazy, summer day, just as my own children did several years ago.

Posted by Veronica Randolph Batterson at 12:00 PM No comments:

The Joy of a Dog in the Snow

What is it about snow that makes most dogs act giddy and as excited as a young child who gets to build a snowman instead of going to school?  Lily, my sweet Golden Retriever loves snow.  If I didn't know better, I would swear she'd been born in the middle of winter and her first introduction to the outdoors had included the white flakes.  But, she wasn't and it didn't.  She made her entrance in July, a middle of the summer pup.  She's a "lounge under the shade tree hound" on a nice warm day.  When snow appears, however, she kicks it up a notch.

Upon receiving our first measurable coating of the white stuff this winter, Lily seemed a little confused.  Bounding down the back porch stairs, she stopped suddenly.  Ears and tail up, she was alert.  She stared at the whiteness, as if to say, "Wait a minute. This wasn't here the last time I was out, but something about it seems familiar".  Then recognition spread across her face and the body language screamed, "Oh, yeah! This makes me happy!".  Then off she sprinted, running around like a mad dog on the loose.  This would not have happened on green, unadorned grass.

Her agility is spectacular.  Dodging trees, the deck and me, she zooms within inches of either smacking head-on into wood or taking my legs out from under me.  I suddenly regret not pursuing the agility training I'd thought about when she was a puppy.  When the running has appeased her, she practices "Stop, Drop and Roll" as if her life depended on it.  Finally coated like a fury snowball, she figures burying her head a few times might bring some sort of satisfaction that only a dog understands.  Then she reclines and finds some frozen snow, settling in to enjoy a treat while thinking she's hiding it from me.  It's sort of difficult to hide the frosty delicacy since it sticks out of the side of her mouth, but she thinks she's being successful.

While reclining on the snowy carpet, ice sticking out of her mouth as if she's smoking it, I wonder how she couldn't be cold.  But her demeanor is one of contentment.  Life is good and she's happy just where she is.  Coaxing her indoors isn't easy after the frolic but the promise of a treat and anything else I can come up with that sounds good to the canine ears eventually works.

The dry-off takes time.  The snow is now small, frozen pellets sticking to her fur.  Digging the accumulation from between her paw pads is a challenge.  In harsher temperatures, we velcro the Orvis dog coat on her, which she is fine wearing. (I shouldn't mention the dog booties I once purchased for her that she hated.  When I finally got them on her, she was as mobile as a stubborn mule, refusing to budge.  I returned them to the store.)

Even after all of this, she is happy.  It's a snow day for Lily.  I enjoy snow days too unless I have to drive in them during rush hour, or shovel after blizzards...and that's another story.


Posted by Veronica Randolph Batterson at 1:19 PM No comments:

I wondered if it was ever going to happen.  Not only has there been no snow (well, I think some weather guy said we'd had about an inch so far), the grass remained relatively green.  Some flowering shrubs were starting to bud...I noticed this on a few lilac bushes yesterday.  Temperatures lately have been as high as the upper 50s and Christmas without snow just didn't seem like Christmas.

I grew up in the southeastern part of the country and remember mild winters with very little snow, if any.  Until about 18 years ago, which was the time I moved "up north",  I was used to celebrating the holidays without snow.  In fact any sign of the white stuff down south usually sent folks running for milk and a loaf of bread. I always thought that was a bit funny anyway.  Why just a loaf of bread and milk?  It might be a good idea to pick up a few other things too...just in case.

Last year, however, it seemed parts of the south received as much snow as we did in Chicago...until the big one in February.  The Blizzard of 2011 was the most snow at one time I've ever seen.  The morning after brought a clear blue sky and mountains of white.  Drifts were high.  One side of our house blocked a snow drift over seven feet tall.  It took us all day to dig ourselves out and, once we had, I didn't care if I ever saw snow again.

Funny how time fades the intensity of events.  As I gaze at how beautiful falling snow looks, especially as it gathers on the giant spruce trees that line our yard, I'll use the day to work on my next book. But I should keep in mind that about a year ago, visiting a nice beach sounded pretty good to me.

Posted by Veronica Randolph Batterson at 9:53 AM No comments:

I've completed one of my New Year's Resolutions...to start a blog.  It wasn't easy.  My arguments against yet another social media account were many:

1) I don't have time;
2) I'll never get anything done;
3) The world doesn't need another blogger;
4) I don't have anything interesting to say;
5) I'll just make people mad if I write something they disagree with;
6) Why would I waste time blogging when I should be focusing "on the craft" (I'm a writer);
7) So on, and so on, blah, blah, blah

I have to say I actually started this because I've been told I need one.  I'm the author of two middle grade books of fiction.  While writing is easy, self-promotion isn't.  Marketing is the worst part of the whole process and I'm in the basement.  I am not a sales person.  So I push my books on Facebook, Twitter, Goodreads, Librarything, Jacketflap, Shewrites...probably some other places too, but I can't remember where.  I have a website too.  If blogging will bring the masses, so be it.  I give up and here I am.

If you're reading this, I'm sorry.  There's nothing witty or headline grabbing about my post.  I can't promise to be a regular blogger, but I'll try my best.  However, I will push my books...for a great read or two, check out Billy's First Dance and Funny Pages.  I promise you'll like them.

Hooray! One New Year's Resolution down...now, on to the treadmill.

Posted by Veronica Randolph Batterson at 1:43 PM No comments: