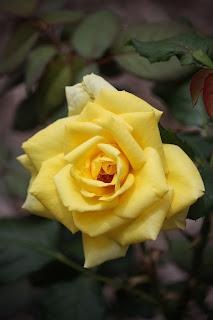 About four years ago we faced a decision that any pet owner dreads. Our family dog was ill and it was "just a matter of time".  No one really explains what that phrase means. You know the outcome...one day you'll no longer have that sweet family member by your side.  But it's how you get to that time and what it involves that have no instruction manual for guidance.

When Charlotte, our previous golden retriever, became sick, the veterinarian tried easing our worry and delaying the inevitable with suggestions of changing her diet and trying various "specialty" prescription medications. We became acquainted with the Compounder, a pharmacist who creates specific prescriptions in doses and consistency geared for individual patients. This patient just happened to be a canine.  I lost track of the number of times I drove to the Compounder's office building, located in an industrial area of town, picking up refills and new medications to try.  Often, the meds were as "hit or miss" as the food concoctions. They seemed to work for a while but it was never constant.  We tried all of the over the counter food the vet suggested and when that failed, we resorted to cooking bland food for her...chicken, rice, anything to give her sustenance.  She often refused eating from her bowl so hand feeding became the norm.  We were determined to get her to eat, so that didn't really matter to us.

Each visit to the veterinarian was always the same. The latest symptom was documented but there wasn't anything that could be done to stop the progression. At one of our last visits, when explaining how difficult it had become to get her to eat, I broke down in tears saying that I knew she had to be hungry. The doctor looked at me with sad eyes, and I wondered how many times he'd repeated this same scene in his long career.  His response of "As long as she's still drinking water..." gave me hope.

After receiving the terminal diagnosis, the one question we always asked of our veterinarian was, "How will we know when it's time?".  The response never changed. "You'll just know," he'd say.  That answer frustrated us.  How could we possibly know? The struggle became one of keeping our pet with us as long as possible versus preventing her from being in pain. She couldn't tell us she was hurting. And we were selfish. We wanted our dog with us forever.  What if we ended her life too soon?

I'll never forget the day when the time did come. It was the slightest little whimper that spoke volumes. I couldn't remember when she had last eaten and it had been days since she'd taken any water. Mobility was rather non-existent by the time. She had lost so much weight that we were able to pick her up and carry her, very telling since, at her healthiest, she'd weighed around 80 pounds. But her coat was still glorious and she remained beautiful...yet she spoke to me that day. The little cry that I hadn't heard until then and I knew. She told me she was hurting and I couldn't bear it. "You'll just know," the voice said, and I did.

Getting through the following weeks were difficult because everywhere we turned we saw our precious dog. Her toys, dog bed, collars, tags, leashes, dog food and medications were reminders. Those were easily remedied, as the meds and unopened dog food were donated to the local humane society and the rest disposed of.  But the intangibles hurt.  The memories were there.  Her enthusiasm, love and companionship filled our hearts with such joy that her physical absence made us feel empty.

We've since invited a new golden retriever into our home and Lily's capacity for life and love is as great as Charlotte's was.  There are times when "you'll just know" replays in my mind.  Now I'm certain anyone who has ever faced such a decision did know, in some way, when the time came.

Posted by Veronica Randolph Batterson at 11:10 AM No comments: