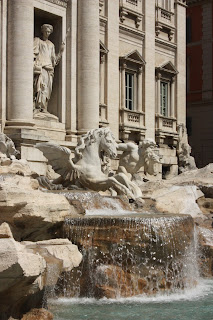 Often I've been asked where and how I come up with story ideas.  It's difficult to answer as there is no set pattern or method to the madness of creative writing.  Life experiences, observations and imagination play together, mixing and blending just enough to produce something you hope others will read and enjoy.

I've always been one to have my "head in the clouds" as some would say.  As a child, I was a dreamer, imagining stories and putting them to paper.  My mind would soar simply from listening to a song on the radio. It was easy to create a storyline from the music I would hear.  I still do that, along with the daydreaming, but observing what goes on around me fuels my writing the best.  Simple, everyday life occurrences can make the most interesting stories.  Sometimes you learn a bit along the way.

On a recent trip to Italy, I was in full observation mode.  Of course the language barrier aided this somewhat (I don't speak Italian), but I learned to get by with the basics.  It helped that I was visiting my younger daughter who was studying in Rome.  I'll give her credit for the assistance.   I found how easy it became to watch and absorb when you couldn't communicate well orally.  Sights were more vibrant, sounds became sharper.  One saw the action and understood without uttering a word.

One day, my daughter and I were enjoying some gelato as we walked down the street (we did that a lot, by the way, gelato and walking and not necessarily together).  A young boy of about ten was skipping along quickly, a cone of multicolored gelato in one hand, when suddenly he tripped.  Now I'm not exaggerating when I say his little form became airborne.  It did.  A couple of one-handed cartwheels followed until momentum slowed enough that he rolled to a stop.  At first, the look on his face reflected shock at what had happened.  Then glancing at the hand holding the gelato cone, his expression changed quickly to something akin to male pride.  He had literally saved the cone.  Not one speck had been lost in that tumble.  And just as quickly, his mother rushed to his side, checking for bumps and bruises.  He glanced at the other hand, realizing he'd hurt it, and burst into tears.  I didn't need an interpreter to explain the conversation between mother and child. There was no need for an explanation of what I'd just witnessed.  That scene was purely simple and innocent and could've occurred (and does occur) anywhere in the world.

Another gelato story (I have a few) came during a very crowded visit to one of the more popular gelaterias.  As I waited for my daughter to receive our order, I stood in a corner, leaning against the wall and watching customers.  One lady in line kept holding up something that looked like a camera phone.  She pointed it in various directions of the room, so I started following the objects of her interest.  It was then I realized she had a small video camera, not a phone.  I saw her focus on the young men filling the orders...it made me wonder why no women were behind the counter.  I probably wouldn't have noticed otherwise.  Then she would record various customers; some waiting, some chatting with friends.  The place was so packed that I seemed to be the only person who noticed what she was doing.  Then she zeroed in on a man eating a gelato cone and he was thoroughly enjoying every minute of it.  He was focused on the pleasure of eating and his face reflected bliss.  At that point, something about it struck me as being very funny.  So I laughed out loud.  It caught the woman's attention and she looked at me and laughed too.  She continued to record the man, laughing with me as she did so.  The gentleman was never aware he was the object of our attention but he took great delight in finishing his gelato with relish.  Again, words weren't needed to share the meaning of something humorous.  I've no idea why she was using a video camera. Perhaps it was for a class she was taking or maybe she had a great sense of humor.  But it was something we've all seen regardless of where we might call home.

When visiting some of the more popular tourist attractions, we often encountered school groups.  All would be led by a teacher or perhaps a parent.  On one occasion, there were kids who appeared to be in middle school following an adult who looked like a caricature of Alan Alda.  He held up a cardboard cut-out of an unknown female whenever he moved.  This was so the kids could find and follow him in the crowds.  They spoke Italian and the boys and girls seemed to enjoy being in the company of their leader.  It then struck me that he was probably a teacher who everyone liked.  The kids were laughing and appeared to be having a good time.  Even though I couldn't understand a word of what they were sharing, I knew they were happy.  I recalled many times over the years, my children taking school trips in the company of their own teachers.

Observations lead to many things.  Knowledge.  Understanding.  Realization.  In my quest to write a story or two, I saw that simple experiences connect us as human beings.  We all worry about our children, laugh at something funny, cry at sorrow and want a good life.  We share compassion and feelings without sharing the words or speaking the same language.

La Dolce Vita...Living the Good Life.  Interpreted in various ways and also the name of a 1960 film by Federico Fellini.  But universal and straightforward in its meaning.  Living a sweet life.

Things That Go Bump in the Night 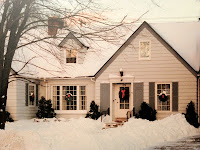 For nine years we lived in a haunted house.  An honest to goodness, noise-making, door-opening haunted house.  It was a lovely Cape Cod style home in Michigan that had been built around 1938.  We were only the third family to own it but we coexisted with who knows how many unseen inhabitants.

Personally, I might be a little predisposed to paranormal belief, but my husband had a practical side to those things.  There were always logical explanations to be discovered for the unexplained. Until "The House".  It made a believer of him.

Our interest in the home came from its potential.  It had a full, unfinished attic, which had already been plumbed and framed.  Our intent was to add more bedrooms and a full bath, which we did, but with some interesting discoveries.  Strange things began as soon as we moved in, but when the renovations started, the activity level became pretty lively.

The first thing of significance happened to me shortly after we moved in.  One morning after I'd walked my daughters to school, I was sitting alone in the kitchen, drinking coffee and reading the newspaper.  I should explain that the entrance to the attic had a full sized door from the kitchen.  Behind the door were the steps leading upstairs.  We kept the door closed because there was no heat upstairs (we hadn't started renovating at that point).

As I sat quietly at the kitchen table, with my back to the door, I suddenly heard a "click".  Jumping, I turned around and watched as the door slowly swung open. Creaking as it did so (it really did), I stood, about to bolt because I was sure it had to be an intruder.  But a quick glimpse on the other side of the door revealed nothing.  It scared the "blank" out of me (any word inserted here will suffice).

The clicking sound was the noise the bolting mechanism made as the door handle turned. There was no draft upstairs, the windows weren't open (it was too cold), and that door was sturdy.  It didn't open on its own.  There was no logical explanation for what had happened.  Eventually, we removed the door once the renovation was finished, but I always looked at it with trepidation from that point on.

The obvious spooky stuff like the television turning on and off, temperature fluctuations in certain areas and our dog staring at an empty room while wagging her tail, were common occurrences, as were other things. But the sounds were baffling.  They were loud, blatant attempts at what seemed like communication.

The noises started in a downstairs bedroom.  It began as scraping on the floor near a window.  The apparent assumption was that some animal must be creating it.  But we checked in the basement underneath the room and outside the window, all along the foundation of the house.  There was no sign of any unwanted critter to be found.   And the sound never moved anywhere.  It was only in that one location in the bedroom.  This continued until we completed the attic.  Then it stopped as suddenly as it started.

Or I should say the party just moved upstairs.  The strangest noise came from one of the finished bedrooms.  It was the sound of knocking.  We would stand in the middle of that room and the knocking would start at one end and loudly go the other.  It was always on the same wall, as if someone was rapping on the surface of the wall with his/her knuckles. It was frantic in nature and the sound moved quickly, often lasting for several minutes.  Was someone communicating with us?  Perhaps they didn't like the walls or felt trapped.  It was strange and one of those unexplainable occurrences that continued until we moved out of the home.

The most frightening occurrence happened after we'd decided to move. I was packing boxes in the bedroom where the original sounds started, and without warning, the light fixture that was attached to the ceiling fell to the floor.  Shattered glass was everywhere.  I was lucky.  Had I been about a foot closer to the center of the room, the fixture would've hit me over the head.  It was the only time I had really felt threatened by our experiences. Needless to say, we were happy to move.

We had been told by a neighbor that the original owner of the home was a widow who suffered a serious fall in the house.  The accident ultimately contributed to her death, but she passed away in the hospital.  If you believe in those things, one might wonder if she was the instigator of the mischief we experienced.  I personally felt a few poltergeists took up residence in our home.

If the popular paranormal show Ghosthunters had been around back then, we would've gladly turned our house over for an investigation.  Instead, we're left to speculate as to the "who" and "why" regarding our experiences and believing with certainty there were no logical explanations.