Independence Pass - Take a Pass if You're Squeamish 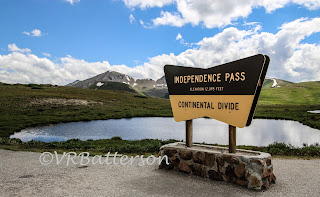 There is a road in Colorado that has earned its name.  Officially called the Virginia Canyon Road, its more famous moniker expresses a person’s state of mind when traveling it.  The “Oh-My-God-Road” (yes, it is listed on maps and found on the web as such), runs from Idaho Springs to Central City in Clear Creek County, passing through historic mining areas and Russell Gulch Ghost Town.  As I’ve never traveled this scenic route, I can only assume the endearment flies from the mouths of passengers as they encounter 12% grade sections along a graveled two-way road (not quite wide enough for two cars), with guardrail-free drop-offs, washed-out shoulders and no winter maintenance.  Not for the faint of heart.
The section of Colorado State Highway 82 that is Independence Pass serves as my own, personal “Oh-My-God-Road”.  Traveling from Denver to Aspen, my husband and I took this scenic stretch of highway recently.  Scenic it is, but if the word “precipice” causes sudden clamminess or the urge to utter things you wouldn’t normally say in polite company, perhaps taking Interstate 70 is the better option.
Independence Pass, elevation 12,095 feet, is the highest paved pass in Colorado and the highest paved crossing of the Continental Divide.  There are higher paved roads, but not mountain passes.  It is a two-lane road with a series of switchback turns, hairpin curves, steep drop-offs, and sections that are minus guardrails. The Colorado Department of Transportation states that tight curves and single lane segments of the highway require heightened attention by drivers.  Yes, single lane segments…for two-way traffic.  Never mind the warnings about rock falls, wildlife and cyclists (we saw a few hearty souls).  Apparently there are avalanches, too, although the pass is closed to traffic from late October/early November until Memorial Day, so that was one less thing to worry about when we crossed.
There is a place to stop once you reach the summit.  We did and I jumped out of the car, camera in hand, eager to get some photos and thankful I’d survived the ascent.  However, at over 12,000 feet, the altitude made it a little difficult for me, and being asthmatic made it tougher.  The frenzy from the drive up probably didn’t help.
I took as many photographs as I could stand without getting lightheaded, of a terrain that was so different from what we’d seen prior to stopping.  It was desolate and barren with sparse growth and small bodies of water.  It was still beautiful.
I’ve read reviews and comments about Independence Pass and the Oh-My-God-Road, and they are mixed.  Seasoned drivers and adventurers tend to think people like me are wimps and there’s nothing scary about either of the routes.  Well, I am a wimp.  And there are others, perhaps in the minority, who agree with me.  Some of those “faint at heart” had some amusing phrases about the pass:  “Hella dangerous”, “Hit the head before you hit the road”, “Death trap”, “Scared spitless”, “The CDOT just lets you kind of figure it out on your own” (about the single lanes).  One woman even described how she’d played her Garmin in different languages repeatedly (to distract her) as her husband drove the curves.  I had my white-knuckle, squirming/muttering/swearing/sweating moments, too, and my husband (who was behind the wheel) said that made things worse for him.  He also proudly claimed the drive didn’t bother him.  I don’t believe him.
When we finally reached Aspen, I was happy.  Happy that we’d arrived, happy we had taken the route we did (it was an accomplishment, after all), happy to see such incredible scenery.  Happiness fostered by relief.  I was more than happy to take I-70 from Glenwood Springs (the alternate route) back to Denver when the time came to leave, which provided beautiful scenery, too, but offered a less than thrilling adventure.  I’m also happy to say about Independence Pass: once is enough for this wimp.

Posted by Veronica Randolph Batterson at 1:05 PM No comments: