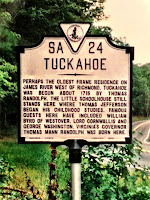 The other day, my daughter reminded me we had never visited Disney World as a family.  She didn't say it as if we'd deprived her of something during her childhood.  Rather, it was mentioned as part of an appreciation for all of the places we did visit.  She did go to the Magic Kingdom with a high school orchestra group once.  I went to Disneyland when I was pregnant with her, so maybe that counts for something.  However, most of our family vacations involved seeing things.  Visiting museums and art galleries, touring historic homes and places are things we always worked in when traveling.  How many kids can say they had their photos taken in a cell at Alcatraz or posed with a Beefeater at the Tower of London?  Our girls can.  Yes, we did take off to the South Carolina beaches on occasion, namely Hilton Head and Kiawah Island.  But the side trips to Charleston, Savannah and Beaufort were made each time, touring the antebellum homes whenever possible.

All of this made me recall one of the prettiest plantation houses we ever visited.  Tuckahoe Plantation in Richmond, Virginia was built in the early eighteenth century.  The 640 acre working farm is a National Historic Landmark and served as the childhood home to young Thomas Jefferson.  Open to visitors by appointment, it is privately owned and now a self-sustaining property.  Is it as stately as Jefferson's Monticello, the Biltmore Estate in Asheville, NC or any of the summer houses in Newport, RI?  Of course not.  I highly recommend touring all of these beautiful homes too.  But Tuckahoe has an understated and quiet presence.  It isn't trying to impress anyone.  It's surviving in the 21st century while maintaining its impressive history.

Today Tuckahoe Plantation raises and markets grass fed beef, lamb, rabbit, eggs and holiday turkeys; the wool from their flock of sheep is spun into yarn to sell; a greenhouse is on the premises; weddings and receptions are held on the grounds and the plantation hosts annual Easter egg hunts and Christmas tours.  For more information, visit its website at Tuckahoe Plantation.

For a little history please read the following essay I wrote several years ago about the plantation house. (As always, content and photos are copyright protected.)           © Veronica Randolph Batterson

The little school house now serves as a gift shop, but in the mid-eighteenth century it served to mold the early mind of our country’s third president.  Thomas Jefferson spent seven years of his young life living at Tuckahoe, an H-shaped clapboard plantation house established circa 1715 high above the James River west of Richmond, Virginia.  The school house is but one still existing structure standing on Tuckahoe’s grounds.  Also reminding visitors of the home’s beautifully preserved history looms the outbuildings and gardens.  Nearby is the family burial plot where many of the original owners of Tuckahoe rest.  Yet, Tuckahoe’s existence is virtually unknown.
Thomas Randolph, builder of Tuckahoe, was one of the sons of William and Mary Randolph of Turkey Island.  Many perceive them as the founding family of Virginia while they were progenitors of some of the most famous names in this country’s history.  Peyton Randolph, President of the First Continental Congress, Edmund Randolph, Secretary of State and Attorney General, John Randolph of Roanoke, as well as Thomas Jefferson all descended from William Randolph.
Thomas Randolph’s son, another William, inherited Tuckahoe from his father and was a friend of Peter Jefferson.  Jefferson married Jane Randolph, William’s cousin.  In 1745, due to William’s premature death and personal request, Peter Jefferson took his family to live at Tuckahoe and care for the parentless Randolph children.  William’s wife had died in 1742.  Young Thomas Jefferson was only two years old.  It is written that he was sitting upon a pillow astride a horse when he and his parents, Peter and Jane, first arrived there.
Prior to reaching Tuckahoe that very first time, perhaps he traveled down the cedar-lined lane that now introduces visitors to the historic dwelling.  Just what kind of visuals this impressive home stimulated in the young scholar can only be imagined.  One wonders if the architecture of the fine house influenced his foresight in designing more famous structures such as Monticello and the Rotunda of the University of Virginia.  Jefferson did learn to read and write in the little school house on the grounds, a place he would later refer to as the “English school”, and he shared his early learning experience with his Randolph cousins and siblings.
In 1752, the eldest Randolph child was considered old enough to handle the daily responsibilities of running a plantation.  It was then Peter Jefferson returned with his family to Shadwell, their home some sixty miles away.  Thomas Jefferson was nine years old when he left Tuckahoe, but the formative years he spent there more than likely inspired his multifaceted interests, talents and abilities as a musician, scientist, architect, politician and lover of books.
Fortunately, this lovely home still stands proudly, displaying where Thomas Jefferson the child lived, learned, observed and thought.  It is a most impressive image especially when one thinks just how much Thomas Jefferson the man achieved.

Posted by Veronica Randolph Batterson at 12:35 PM No comments:

"April Showers bring May Flowers" as the saying goes.  Then the month of June thunders its entrance in a torrential downpour.  Figuratively, of course.  No other month has the potential to create the greatest emotional turmoil than June.  It's the month of brides and graduates; it holds pride for accomplishments and hope for the future.  It matters not if I personally know the "vision in white" or the one carrying the diploma.  All it takes is to hear the music and I become a sniveling mess.

When Wagner's Bridal Chorus (Here Comes the Bride) is performed as the bride makes her entrance and all turn to see, the on-switch for the waterworks display clicks.  The featured one could be wearing a beautiful designer dress or one made of duct tape.   It doesn't matter.  It's the music and the symbolic meaning that make tears well in my eyes every time I hear it played (and those tears usually spill down my face uncontrollably).

It's the same when I attend graduations.  Who knew Pomp and Circumstance could be so moving?  I'm determined each and every time not to shed a tear.  I'll stand without blinking for as long as my eyes can take it (the zombie/not enough sleep/under the influence look), then the lids close in relief and the dam breaks.  It's probably a good thing everyone is dressed the same as focusing is a bit difficult at that point.

And why is Pachelbel's Canon usually included as part of the wedding music repertoire?  Johann Pachelbel's little ditty creates emotional issues for me.  Perhaps it's because my older daughter is a violinist (or fiddler, depending on your preference) and was classically trained for a dozen years.  She performed Pachelbel's Canon so often over the years that she could play it in her sleep (I probably could too since I heard it just as much, and I don't play a musical instrument).  It is one of those pieces that will always cause me to turn nostalgic simply for the association to my child.  So the probability of tear duct action is great.

In all fairness to the season, the calendar doesn't have to indicate the month of June for a song or event to induce weepy eyed syndrome.  Simply standing in front of the Lincoln Memorial in Washington, D.C. with its historical significance is emotional.  The same can be said about visiting a National Cemetery and viewing the simple uniformity of the landscape.   I have grandparents buried at one, so it may hold a little more significance for me.  Didn't John Denver sing, "I know he'd be a poorer man if he never saw an eagle fly" in one of his songs?  Well, seeing an eagle soaring freely is one of those touching times for me and the eyes get a little misty.

Hearing the lyrics to Auld Lang Syne (attributed to the Scottish bard Robert Burns) creates an air of wistfulness for some reason, as do the July 4th celebrations when seeing fireworks synchronized to Tchaikovsky's 1812 Overture, particularly if performed by the Boston Pops.  (By the way, Boston has to be the most patriotic city to visit for Independence Day, but that's for a future blog post I think.)

So June has its moments of sentimentality, perhaps more than the rest of the year, but the other eleven months are not without the need for a hanky on occasion.  It doesn't mean I'm a blubbering simpleton.  I suppose I just get carried away by the emotion and meaning.  Innocence, new life, hopefulness, pride, patriotism, honor.  These are words that evoke feeling and meaning to life.  They should stir something in most people.  Some of us just feel a little more deeply.
Posted by Veronica Randolph Batterson at 12:51 PM No comments: