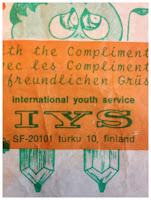 I'm revealing my generation and age in this post but both are needed to explain the topic and why it makes me feel a little nostalgic.

It was the late 1970s.  I learned to type, not "keyboard" as my children did, in a typing class using a manual typewriter.  Eventually, I upgraded to an electric typewriter and thought it pretty advanced at the time.  There were no personal computers or cell phones, so text messaging and instant anything were things of the future.  Our world wide web was found in libraries that offered reference books and encyclopedias.  Anyone remember the Dewey Decimal System?  What about pen pals?

In 1977, my high school French teacher believed in cultural exchange through an organization called the International Youth Service (IYS).  Founded in 1952 and located in Finland, the IYS was an international penfriend organization.  For a small fee per address, the IYS matched students (between the ages of ten and twenty) around the world.  Pen pals were found based on age, country, interests and language abilities.  Of course, my French teacher suggested we request students from France, but the beauty of IYS was your name went into a "pool" of students.  This allowed the opportunity to have multiple connections from all over the world.  And I did.

I communicated with several students from Italy, Northern Ireland, England and France.  Some lasted only through a few letters.  Two of them, however, shared letters, postcards, photos, birthdays and Christmas celebrations with me from 1977 until I graduated from college.  Then, as with everyone, "life" started and we all got too busy to write letters.  Contact was lost.  Unfortunately, the pen pal generation ended, as I knew it, and IYS closed its doors in 2008, stating it couldn't compete with the Internet.

It was the Internet that actually allowed me to reconnect with one of my friends.  I received a Facebook message a few years ago from someone asking if I knew one of my former pen pals.  The message came from my friend's daughter and her mom had been looking for me.  Fortunately, my maiden name is part of my full name on Facebook.  She might not have found me otherwise.

From that point on, my friend and I have picked up where we left off, catching up and sharing our lives through emails instead of postal letters.  She still lives in Milan, Italy and is a successful businesswoman.  Luckily for me, her English is perfect.  She refuses to get a Facebook page, but her daughter and I are trying to convince her to change her mind.  Maybe she'll come around to it someday.

As for my other friend, I think I've found him via Google.  When we were young letter writers, he was training to become a chef.  He eventually left Northern Ireland to live in London, and in his letters he'd often explain the training he would go through.  I found my box of letters from that time (I still have all of them) and in one he'd described going to a Bob Dylan concert in London in 1981.  In another, he mentioned going out in London (1981) to "celebrate the wedding of Di and Charley" even though it meant nothing to him.  Recently, when I searched his name online, I found a chef with his own restaurant in Ireland, which seems to being doing well.  I'm happy for him and hope to make contact one day.

I'm surprised, but pleased, the IYS was able to stay operational as long as it did.  I'm also sorry that the younger generations can't experience connecting with people the way I did.  Yes, it's easy and immediate now but at the same time probably less personal.  In my opinion, it's the same with sending Christmas cards (a tradition we still follow).  Nowadays, people send holiday greetings via email, and that's okay.  Times change and eras merge.  Letters rarely go via the USPS, or snail mail as it's commonly referred to now (Pony Express in the old days).  Fast, high-speed, instantaneous...all adjectives to describe our lives today, and the way connections are made around the world.  Perhaps remembering how things were once done helps us appreciate the now.  It does for me...while I readily become nostalgic, too.