Your Life is Now

When I was about seventeen years old, I began planning.  It might have started sooner but that’s my earliest recollection of it.  The restless energy of “what’s next and how do I get there?” took hold of me and, for a while, my life became a series of stepping-stones to the next thing.  I didn’t enjoy my senior year of high school, so my focus became college.  In college, my goal was to graduate early.  I accomplished it, even with transferring from one school to another, working, and doing multiple internships.  Looking back, I can say that all it got me was a degree and a shove into the world of working full time.
Before I knew it, life grabbed me and I watched years pass like days; one job led to the next with moves to new cities, and my kids grew up faster than I liked.  I said goodbye to old friends, hello to new ones and continued to plan for the next stage of my life.  Even now, I still do it.  I’ve written four books, published three and I’m writing the fifth, yet I’m planning the next and the one after it.  I think I need to cram as much into life as I can get.  Perhaps it’s my age and I feel I’m running out of time.  Seeing friends and family members pass away can do this.  Our own mortality looms.
However, it has also allowed me to reflect on the importance of slowing down, too.  At what point do we realize that life is the journey?  We can plan for the stages of it: graduations, careers, marriage, a family, growth, travel, retirement.  But it’s the jolts, surprises and unexpected knocks that sidetrack you, make you laugh, cause you to cry, make you shake your fist at the world and open your eyes to things you’d never considered before.  It’s the day-to-day living, not the planning; it’s the now, not the future, because there is no guarantee you’ll see it or benefit from all you’ve planned for yourself.
Your life is now.  I borrowed the title from John Mellencamp’s song, even though the expression is one that’s used often about living life in the moment.  It applies to the journey.  Don’t sprint; take a stroll.  Breathe deeply and smell the roses; appreciate the sound of rain, dance in it.  Relish the taste, laugh, be sentimental, love openly, show kindness, be fearless.  Take the back roads, not the interstates.  Learn, listen and be okay when things don’t go as planned.  Appreciate the small things that come your way along that epic odyssey of life.
As the Thanksgiving holiday approaches, I find myself on another emotional roller coaster.  Change is coming, yet I’m going to enjoy the day itself and the meaning behind it, no plans around it other than being with family.  Tomorrow will be dealt with when it gets here.  And if I had done things differently in my life, I would’ve slowed down in college, made deeper friendships, hugged my children until they begged me not to, laughed a little louder and longer, apologized more often and not once would I have sweated over things that didn’t really matter.
Thank you for reading this blog and I hope Thanksgiving finds you happy and healthy; cherish the time with your families and friends, live that moment, the day, to the fullest.  Have a peaceful and fulfilling holiday. 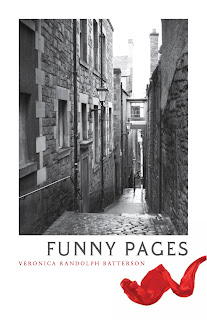 I'm using this space to share an excerpt of my book, Funny Pages, which was published in 2011.  It's still available for sale on Amazon and via several other online sites. I have copies to share, as well, if you'd like to have one signed.  It was written for the middle grade/young adult reader, but I've had adults tell me they liked it, too, particularly the dialogue between the uncles. So that's one section I'm sharing.

Drawing from the archives and posting things via Fine Art America have been my source of blog posts of late because I'm trying to focus on the first draft of my new novel.  It's coming along...still happy with how it's evolving.

As always, thanks for reading my work and the following is copyright protected (©Veronica Randolph Batterson).  Funny Pages is registered with the US Copyright Office.