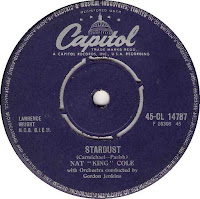 This is the first time I've written a short story that potentially wraps up a book that's still in the outlining process.  In other words, I haven't started the manuscript yet, but I'm giving a bit of a back story at the end of it.  At this point, I don't have plans for the book to be titled Stardust, and I don't really know where it's going until I start writing it.  I just have an idea and I'm sharing part of it (but the protagonist will see Ava again).

Nat King Cole's version of Stardust (originally composed by Hoagy Carmichael, lyrics by Mitchell Parish) was the song I had in my head when writing this.  Thanks to all for reading, and as always, copyright applies (©Veronica Randolph Batterson).

“That’s yours,” he told the waitress as she brought his change to the table.
“Thanks,” she smiled, trying to strike up the nerve for conversation.  “It’s just that me and the others, well, we’re certain we’ve seen ye somewhere before.”
“I’ve often been told I look like somebody,” he replied, shrugging. “Casualty of having a common face, I guess.”
“Aye, a casualty maybe, but your face isn’t common, I promise ye,” she winked and sashayed back to the counter, whispering to two other women who had been working that afternoon.  They glanced his way.
He thought they were around his daughter’s age, much too young to remember who he was, and he certainly didn’t look as he did three decades earlier at the height of when everyone knew his name.  He’d primarily stayed out of the public eye by choice since then and was photographed very little.  It would surprise him if they knew.
Then as if he needed reminding, the background music in the little café nudged him toward his purpose.  The song began, stirring memories.  He grabbed his keys, got his coffee to go and strode outside.

He walked the sidewalks of Pitlochry, glancing into stores, recalling how the town used to be, and delaying the inevitable.  He had been in Scotland a little over twenty-four hours, yet still hadn’t found the courage to see her.  The flight from L.A. had been tiresome and when he landed in Edinburgh, all he wanted to do was go to the hotel, catch up on his sleep and figure out what he’d say once he lost the fear of facing her.  Instead, he took the rental car and headed for the Highlands to clear his head and think.  The more he drove, the farther away he was from the woman he’d traveled over five thousand miles to see again.  One more day didn’t matter to the twenty-five years that had already passed.
His first stop the morning he arrived had been in Callander, just shy of the Trossachs where he had spent summers as a seasonal ranger in the park.  It had been a while, but driving the hills of his youth came back to him naturally, as did driving on the other side of the road.  His behind the wheel experience began at the age of fourteen when his dad suffered a broken leg, and no one else had been around to make the trek to the hospital.  He’d maneuvered the roads as well as could be expected and, for his efforts, had been rewarded a birthday present one month early.  A guitar.  He knew it had taken his father months of working and saving to afford it.  The instrument helped decide his career path; that decision led him to Ava.

Nat King Cole crooned the song over the radio the first time he saw her, and every time he heard it his thoughts returned to that time.  He’d found himself in Nashville in 1976, just as his career was getting started.  She was a pretty eighteen-year-old innocent with a transistor radio to her ear, leaning against a tree as it played.  She hummed and swayed to the music and instantly he’d felt a connection; a friendship took root that day and grew into something greater over time.  There was no attempt at impressing him; Ava treated him with genuine kindheartedness, just as she did everyone else.  It was needed in a business that was starting to suck the life out of him, even early on; he soaked up every bit of substance she exuded and that sustained him until demands of the road took him away.
It was nearly eight years later that they had their first date.  By that time, he was burned out with the music industry, had risen quickly, made the money, needed rehab and was ready to turn away from all of it.  Then Ava walked back into his life, a young woman with ghosts of her own, and their relationship took a different turn.  He fell in love.
“Do you remember this?” he had asked her once, turning up the volume on the car radio as the Cole song suddenly played.

“Of course. It came on the radio when we first met. I was so nervous when I saw you, I’m surprised I remember anything though,” she’d replied.
“You nervous? You hid it well.”
“An act,” she’d laughed.
He remembered taking her hand then and what followed were the happiest eighteen months of his life.  They became inseparable.  When he had commitments that couldn’t be canceled, he made sure she was there with him.  The togetherness and relationship weren’t approved by everyone.  Their whirlwind romance was endured much to the chagrin of Ava’s aunt, along with his long-time agent, Sonny, who usually didn’t care what anyone did as long as a potential deal wasn’t axed as a result.  Both had expressed displeasure at them being a couple, often enough for him to suspect their hand in what ultimately happened.
The last day he ever saw Ava, she’d been excited to share some news with him.  He remembered how happy she seemed.  Before she could tell him, Sonny called to arrange a meeting, saying it was urgent and couldn’t wait.  Ava encouraged him to go and said they would talk that evening.  Three hours later she was gone.  It was as if she’d just disappeared.  The vanishing act caused him to panic and he called everyone they knew, including Sonny and her aunt Dorothy, asking if she had contacted them.
“Why, honey, I haven’t seen her.  You two have a lovers’ spat?” Dot’s voice had drawled, the southern accent accentuated a little too much.  He’d learned long ago that southern hospitality was genuine in some, but with Dorothy he had known to watch his back.  Her knives were sharp.  She was as tough as nails, and he didn’t believe her.  Sonny had been no help either, denying any knowledge of Ava’s whereabouts.
Hours turned into days; weeks followed, blending into months until a year had passed with no sign of her.  The police found no clues, ultimately deciding she had left him on her own free will, encouraging him to move on.  He never did.  He turned to the only ‘friends’ he trusted at that time, his old buddies he referred to as alcohol and drugs, once again finding solace in the vices that Ava had given him reason to leave.  An overdose and breakdown followed, and he spent two months in a detox facility getting clean and sober.  The day he walked out, he quit the business, fired Sonny, and became a recluse.  A marriage and divorce happened, but he never forgot the woman he loved.
Of all people, it had been his daughter who found her.  Dear sweet Haley and her tech-savvy boyfriend who, until that point, he’d always found a little annoying.  They broke the news to him a week ago with Haley giving him a hug and saying before she left, “Dad, there’s something else, but she owes you that explanation.  Go to her.”  He had no idea how Haley had known about Ava, yet she’d made the same mistake he had all those years ago with the assumption Ava meant something to an old friend of his.  Uncertain what had given his daughter that notion, his own belief at the time had been driven by stupidity and insecurity.  He had wasted too much time then, and he was doing so now.

He glanced at his watch; Edinburgh was about an hour and half away.  If he left now, he might just miss the worst of the traffic, have time to check in to his hotel and shower.  Beyond that, it was anyone’s guess with much depending on Ava.
As he drove away, the sights of Pitlochry behind him, he started to have hope.  He’d told himself to expect nothing, but insist on answers and to walk away with assurances she was happy.  He made no promises to himself.

Posted by Veronica Randolph Batterson at 3:40 PM No comments: