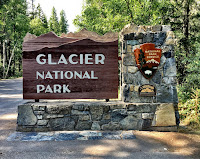 The first indication of warning was from the Montana Department of Transportation.  The portable road sign with its changeable message flashed, “Wildfire Situation Ahead. Do not stop along the shoulders. Reduced speed enforced.”  The next message was about a mile farther, painted on a wooden plank and propped against a tree in someone’s front yard.  It read: “Thank you firefighters. Stay safe.”
Unbeknownst to us, we were driving into a wildfire zone.  I suppose under normal situations, the haze and smoke would have been indicators, but we’d been in Montana for several days and were leaving Glacier National Park, which had been dealing with recent wildfires that started the day before we arrived.  As a result of a severe thunderstorm, 150 lightning strikes sparked several wildfires due to very dry conditions, so the haze had been part of our visit.  Three fires in the park are still burning, with officials speculating that the larger one won’t be completely contained until the first snowfall of the season.
But this particular wildfire had been burning longer and continues to spread.  The Rice Ridge Fire in the Lolo National Forest started July 24.  It, too, was triggered by lightning.  Driving south along Highway 83 and nearing the town of Seeley Lake, we saw and smelled what residents had been dealing with for a while.  As one local said to us, shrugging, “You get used to it, but it’s frustrating.  What are you going to do? Lightning.”
As of this writing, the Rice Ridge Fire is still burning, consuming over 139,500 acres and the town of Seeley Lake has been evacuated.  Its residents not only have the worry of what might happen to their homes and businesses, they also have been breathing some unhealthy and toxic air for weeks.  Yet very little about this or any of the forty-eight active wildfires that are ravaging the state have been reported nationally.
Our visit to Montana originated in Salt Lake City, Utah.  As my husband and I drove closer to Idaho, the haze became part of the landscape and stayed with us until we headed home from North Dakota.  Except for one afternoon.  Clear visibility occurred the day after some heavy rains cleared the smoke for a bit in Glacier National Park.  It briefly revealed to us what I had traveled there to see.  Stunning vistas, rugged terrain and Montana’s big sky.  However, those rains didn’t contain one little fire.  From the shores of Lake McDonald at Apgar Village during those clear-sky hours, we saw the Sprague fire smoldering just behind some peaks, its smoke rising into the sky as if being released from a smokestack or chimney.  Nothing more.  However, it became a lot more.  It has now burned over 14,000 acres, destroying a National Historic Landmark, Sperry Chalet (built 1914), in the park and forcing early closure of nearby McDonald Lodge and the west entrance to the Going-to-the-Sun Road.  It’s the fire that some think that only Mother Nature can entirely contain with snowfall.  That might seem fitting since Mother Nature was its cause.
I had originally planned for this blog post to be about our visit to Montana, with descriptions of the beautiful scenery accompanied by photographs I had taken.  I couldn’t wait to see “Big Bend” along the Going-to-the-Sun Road, its carpet of wildflowers leading down to a valley, with four separate mountains and peaks jutting against blue sky and white clouds along the horizon.  It wasn’t to be. The breathtaking drive up to Logan Pass in one of the park’s official Red Buses (something I highly recommend doing given the narrowness of the Going-to-the-Sun Road and the amount of traffic on it) was special.  But “Big Bend” couldn’t offer the usual spectacular view, as haze and clouds hung low like curtains shuttering away the setting behind it.  Logan Pass was the same.  Mother Nature’s theatre was dark.  Still, glimpses of the grandeur were there, better caught with my eyes and my imagination, if not with my camera.  And while I had hoped for more photo opportunities of that big sky, I feel it was good to see first-hand what was happening, and unfortunately what was to come.
Montana is burning.  As are Oregon, Washington, California, Idaho, Colorado, Wyoming, Utah, and Nevada.  Over eight million acres burned thus far; people, wildlife, homes, buildings and livelihoods continue to be affected, with air quality unfit in many places.  Lives have been lost. And the word needs to spread, just as rampantly as those fires have.  The nation’s attention has been focused on the hurricane devastations in the south, and rightly so.  But there is need and attention north and west, and it’s a desperate situation.
In addition to The American Red Cross, there are other donation and giving opportunities available in Montana such as The Missoula United Way, the 406 Family Aid Foundation, Garfield County Fire Foundation Relief Fund (via fundly.com), Bear Paw Volunteer Fire Department (on its Facebook page), Lolo MT Community Outreach Group, Eureka Chamber of Commerce and the Libby Ministerial Association. The same exists for all of the other states affected, as well.  Simply do a google search to find what’s best for you.  Everything helps, and pass the word.  Share the need, this post, news articles and the like to your Facebook and Twitter pages.  Tell your friends and families.  Hopefully, the media will take notice.