The Backstory to Williamsburg Hill 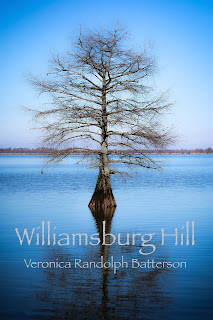 My novel Williamsburg Hill will be published soon, and I thought I'd share the backstory of how it started.  The genre is historical fiction with a dual timeline (present day and 19th century).  The back cover blurb begins with the following:

When history touches the present through an old ghost town, its cemetery, and an ancestral piece of furniture passed down through generations…


In early 2014, I began listing ideas for my next book.  Historical fiction was a genre that I wished to attempt, but it was important to me that the historical part of the book be something that wouldn’t present a lot of challenges with research.  I lived in the Chicago area at the time, so I assumed some localized history would be easy enough to research; if travel were required, it would be simple to do by car.  Easy and simple were far from reality, as I discovered, with legends and lore playing greater roles than historical documents in creating this book.
I read about a town in south central Illinois, once active due to its main street being part of the Old Anglin’ Road stage coach route, that became non-existent in the late 1800s.  The town of Williamsburg (or village as some referred to it) was founded in 1839, and the region was referred to as Cold Spring.  Established at the time with a mill, the stage line, a general store, a blacksmith and postmaster, a medical doctor, Masonic hall and Methodist church, it is difficult to imagine how progress ultimately crippled the area and made it a ghost town.  In 1881, the stage line was discontinued as train travel replaced it, and the railroad tracks bypassed Williamsburg.  Residents and businesses moved, most to nearby Lakewood, leaving their former town to waste away.
Williamsburg was located on the south side of Williamsburg Hill which still stands as the highest point in the area at over 800 feet.  Some speculate the hill was formed due to glaciers; others seem to think it to be an Indian mound.  There is really no definitive answer to its existence.  But resting at the top of Williamsburg Hill is Ridge Cemetery, still accessible today.  And there was the basis of my story.
I traveled to Ridge Cemetery twice (in 2014 and 2016).  It isn’t a place that one simply discovers on an afternoon drive. It is a pre-planned destination; its isolation is assurance of this.  It also isn’t a place a person should travel to alone.  As there is much folklore but little history that I could find about the cemetery, I assume it originated around the time that the village of Williamsburg did.  The dates on many of the tombstones verify this, but there are recent burials there as well.  It is an old cemetery, yet a currently used one; it is serene and peaceful, while strange and a little unnerving; it’s beautiful, yet rugged; maintained but weathered.  And yes, it is somewhat creepy.
The cast of characters in this story are fictional, with the exception of J.P. Dunaway, J.W. Torbutt, Dr. Thomas Fritts, and Orville Robertson.  Their occupations in my book are true to their history.  What is a little sketchy about them might be the location of where they settled.  I was fully into writing when I discovered a first-person historical account by a Dunaway descendant indicating the family had lived in Findlay, Illinois, not Williamsburg.  Because I was too far into the story to change anything, I took liberties.  Documented history about the area wasn’t easy to find, but plenty of folklore existed, so much of what I wrote is based on this.  And most of the folklore indicates these four figures and their families were part of Williamsburg Hill, at least at some point during the town’s reign.  It was important, perhaps out of obligation, to briefly mention the town of Findlay at the end though, which I did.  I also interchanged Williamsburg and Williamsburg Hill within the story, because it seemed to me that people living there would’ve done this as a way of generally referring to their home.
Finally, there is nothing left of Williamsburg.  Ridge Cemetery is not private, but open to anyone who wishes to visit as long as it’s done during the daylight hours.  It is a place deserving of respect.  If visiting, observe its history, wonder about its past, and listen quietly.  Perhaps you, too, will then hear the voices and laughter dancing through the breeze just as my character, Erastus, did.